Coral Gables Memory is an album of photographs donated to the City of Coral Gables by Kerdyk Realty. These photos of homes and business structures were taken mostly in the 1940s. The buildings shown were built in the 1920s and 1930s. They show the development of Coral Gables, a planned community that drew from the Garden City and City Beautiful movements of the late 19th and early 20th centuries. 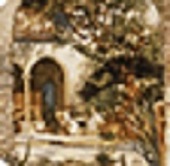